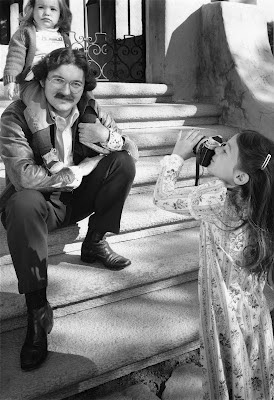 My Dad, John Blom, just sold the building that has housed his studio, John Blom Custom Photography for 25 years. He told me it was a done deal yesterday and today I am feeling a little melancholy. Don’t get me wrong, I am so happy for him as he has been trying to sell for a while now. But, that studio was such a huge part of my life, I feel like there should be a memorial service or something. I remember when my parents opened their new “dream” studio in 1988. I was a sophomore in college and couldn’t be there for the grand opening which really bummed me out. I had worked for them in their photography studio at the old location all during high school and the summer after my freshman year of college. I felt like it was a part of me and I so wanted to be there to support them. I think I sent flowers. That dream studio supported all of us for so long. So much has happened there! I worked there every summer home from college and after graduation while I was waiting to start law school. I can’t even count the number of brides that I met with, number of weddings I helped photograph, and number of wedding albums I ordered during those years. I worked there during my first two winter home from law school and when my husband and I had our engagement session done. I worked there during my first summer home from law school when I was dating my husband. I used the bathroom at the studio (I had my own key) when I would secretly come home to see my husband and stay with him. I didn’t want him to know that I had to do things like poop! I remember calling there from my apartment in San Francisco incessantly the day that the Laguna Fire was spreading over the hills, only to be told that “all circuits were busy.” I remember my dad telling me how his clients called him after their houses had just burned down asking, hoping, praying that he could print their treasured family portraits for them once again. I worked there the summer my mom got sick with cancer and did all of the sales appointments that she would have done. I flew over and worked there a few times each month while my mom was sick. Every client that I met with was so kind and sensitive, always asking after my mom and telling me that they knew all about my boys and me from her telling them over the years. Each day I was there, my dad and I would go out to lunch together and drive home together. It was a hard, sad time, but also very comforting to be in a place that I knew so well. After my mom died, I came back every so often for a short time to help my dad out at the studio. It was sad and comforting all at the same time. But, it had lost some of its sparkle that my mom had brought. After she died, I used to sit in my mom’s office and look around and imagine her talking to me as she had on those many days that I worked there. I know that it was hard for my dad to be there after she died, hard for him to take on her role as well as maintain his own, hard for him to run the business alone that they had built together. So, it didn’t come as a surprise when he said he was selling the building and would go back to working out of his house. I know it is the right thing for him to do, but it will be sad to visit this summer and not be able to stop by and walk to Rose’s with him or drive by and see the familiar display windows and his logo. It will be hard to realize that part of my life is gone forever.

The only way for me to really remember the beautiful moments that happen everyday is seeing images that transport me back to that moment in time. I would like to give you this gift with the images I create of your family and children.

As a child, I remember obsessively looking through the photography books so prevalent in our family home. Staring at each image searching for clues to the stories of the people and places documented became one of my favorite past times.