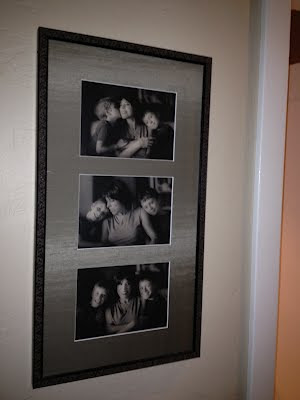 This week is a little hard for me. Three years ago almost to this day I realized that my mom was going to die. Of course I had known for almost a year that she was really, really sick and was not going to get better. I had looked on the internet and everything I read said she might live a year if we were lucky, so I knew in my head. She had been diagnosed with stage four pancreatic cancer about 11 months before. But, it was at the very end of May that it became real for me, that her inevitable, looming death became a real thing to me. She looked like she was dying. Her body was shutting down. She was so gaunt, maybe weighing 90 pounds. I remember my dad called me crying. He was bringing her to the hospital because she couldn’t keep anything down and finally had asked to go. I hung up the phone and went right to the airport so I could be there for him, for them. “This is it,” I thought. Before I left though, I kissed my boys goodbye and stood in front of this portrait that I did of my mom and my boys. I looked a long time. When I took it, she had just come home for her surgery almost a year before. I made her do this with the boys because I knew that they, that we, would need it later. She was not happy about it. She didn’t feel great and was self conscious about how she looked. But she was a sport. She put on her lipstick (she wore it right up until she couldn’t put it on anymore) and became their “Gram” again. She was herself with them and they loved her so much. It shows in these images. So I stood for a long time trying to burn these images into my mind so that when I saw her this time, and when I was so sad, as I knew I would be, I could grab onto these. On the saddest day of my life so far, the day my boys said goodbye to their “Gram” and I stood at the door listening to her talk to them, and watched them read together in her bed, and listened to those two sweet little boys sob, I pictured this image. This hangs in our hallway and we all pass it every single day. Sometimes I will stop and look for a while. Sometimes I see the boys doing the same. Sometimes, if I am having a hard day I will see it as I rush pass and it helps me to put things into perspective. To have had a relationship and the love of my mother is a good thing. For her to have had a special, separate one with my boys is a great thing and something that they will remember every time they look at this. My oldest son Nick said to me just a few weeks ago after I saw him looking at their portrait, “Remember when we had my birthday with Gram and Papa and Gram got me 11 scoops of any ice cream I wanted instead of a cake (he was turning 11)? That was cool!” I have clients who have suffered incredible loss. I know what I do isn’t saving lives. I know I am not a doctor. But, what I feel like I do give is something that will bring you back and make you remember those that you have loved so much. I know what it means. Life is so fragile and I know how quickly time passes and how an instant can change everything.

The only way for me to really remember the beautiful moments that happen everyday is seeing images that transport me back to that moment in time. I would like to give you this gift with the images I create of your family and children.

As a child, I remember obsessively looking through the photography books so prevalent in our family home. Staring at each image searching for clues to the stories of the people and places documented became one of my favorite past times.